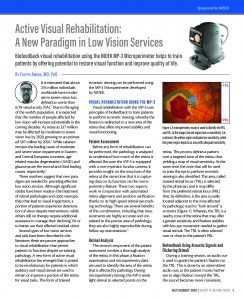 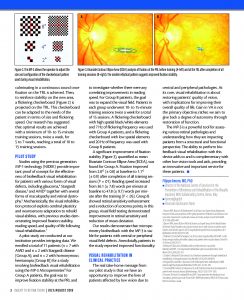 It is estimated that about 216 million individuals worldwide have moderate to severe vision loss, defined as worse than 6/18 visual acuity (VA).1 Due to the aging of the world’s population, it is expected that the number of people affected by low vision will increase substantially in the coming decades. As many as 337 million may be affected by moderate to severe vision loss by 2020, growing to an estimated 587 million by 2050.1 While cataract remains the leading cause of moderate and severe vision impairment in Eastern and Central European countries, age-related macular degeneration (AMD) and glaucoma are the second and third leading causes, respectively.2
These numbers suggest that new paradigms are needed for providing effective low vision services. Although significant strides have been made in the treatment of retinal pathologies and optic neuropathies that lead to visual impairment, a portion of patients experience deterioration of vision despite interventions, while others still on therapy require additional assistance to manage their declining VA or to better use their affected residual vision.
Several types of low vision services and aids have been described in the literature; these are passive approaches to visual rehabilitation that permit patients to function despite an existing pathology. A new form of active visual rehabilitation has emerged that is poised to be revolutionary for patients in which auditory and visual stimuli are used to retrain or improve a portion of the retina for visual tasks. This form of trained eccentric viewing can be performed using the MP-3 Microperimeter developed by NIDEK.

VISUAL REHABILITATION USING THE MP-3
Visual rehabilitation with the MP-3 uses principles of biofeedback to train patients to perform eccentric viewing, whereby the fixation is redirected to a new area of the retina that offers improved stability and visual functioning.
Patient Assessment
Before any form of rehabilitation can be performed, the pathology is analyzed to understand how much of the retina is affected. Because the MP-3 is equipped with a non-mydriatic fundus camera, it provides insight on the structure of the retina at the same time that it is capturing data on its function via the microperimetry feature. These two aspects work in conjunction with automated retina alignment and position verification thanks to its high-speed retinal eye-tracking technology. There are several benefits of this combination, including that measurements are highly accurate and correlated to the precise area of pathology; they are also highly reproducible during follow-up examinations.3
Retinal Analysis
The second component of the patient assessment involves a thorough analysis of the retina. In this phase, a fixation examination and microperimetry data are used to identify the area of the retina that is affected by pathology. During microperimetry testing, the MP-3 sends light stimuli to selected points on the retina. This process defines a pattern over a targeted zone of the retina, thus yielding a map of visual sensitivity. At the same time, the zone that will be used to train the eye to perform eccentric viewing is also identified. This area, called trained retinal locus (TRL), is selected by the physician, and it may differ from the preferred retinal locus (PRL) that, by definition, is the area (usually located adjacent to the zone affected by pathology) used to “look around” a scotoma (Figure 1). Whereas, the TRL is a nearby zone of the retina that may offer a greater sensitivity and fixation stability with less eye movement needed to gather visual stimuli. The TRL is often selected over or close to the patient’s PRL.
Biofeedback Using Acoustic Signals and Flickering Stimuli
During a training session, an audio cue is used to guide the patient’s fixation to the TRL. This is done by an intermittent audio cue; as the patient moves his/her eye to align fixation toward the TRL, the sound becomes more consistent,culminating in a continuous sound once fixation on the TRL is achieved. Then, to reinforce stability on the new area, a flickering checkerboard (Figure 2) is projected on the TRL. This checkerboard can be adapted to the needs of the patient in terms of size and flickering speed. Our research has suggested that optimal results are achieved with a minimum of 10- to 15-minute training sessions, twice a week, for 5 to 7 weeks, reaching a total of 10 to 15 training sessions.

PILOT STUDY
Studies using the previous generation MP-1 technology (NIDEK) provide important proof of concept for the effectiveness of biofeedback visual rehabilitation for patients with various forms of visual defects, including glaucoma,4 Stargardt disease,5 and AMD6 together with several forms of maculopathy and retinal dystrophy.5 Mechanistically, the visual rehabilitation protocol exploits cerebral plasticity and neurosensory adaptation to rebuild visual abilities, with previous studies demonstrating improved fixation stability, reading speed, and quality of life following visual rehabilitation.7
A pilot study we conducted at our institution provides intriguing data. We enrolled a total of 11 patients (n = 7 with AMD and n = 2 with Stargardt disease [Group A]; and n = 2 with homonymous hemianopia [Group B]) for a study involving biofeedback visual rehabilitation using the MP-3 Microperimeter.8 For Group A patients, the goal was to improve fixation stability at the PRL and to investigate whether there were any correlating improvements in reading speed. For Group B patients, the goal was to expand the visual field. Patients in each group underwent 10- to 15-minute training sessions twice a week for a total of 15 sessions. A flickering checkerboard with high spatial black/white elements and 7 Hz of flickering frequency was used with Group A patients, and a flickering checkerboard with low spatial elements and 20 Hz of frequency was used with Group B patients.
A significant improvement of fixation stability (Figure 3), quantified as mean Bivariate Contour Ellipse Area (BCEA), was found for Group A. Fixation improved from 2.8°2 (± 0.8) at baseline to 1.1°2 (± 0.9) after completion of all training sessions (P = .01). Reading speed increased from 36.1 (± 7.8) words per minute at baseline to 47.8 (± 9.7) words per minute after the training (P < .05). Group B showed retinal sensitivity enhancement and a reduction of scotoma points; in this group, visual field testing demonstrated improvement in retinal sensitivity and reduction of mean deviation.
Our results demonstrate that microperimetry biofeedback with the MP-3 is viable for patients with central or peripheral visual field defects. Anecdotally, patients in the study reported improved functionality.

VISUAL REHABILITATION IN CLINICAL PRACTICE
The real take-home message from our pilot study is that we have an opportunity to improve the lives of patients affected by low vision due to central and peripheral pathologies. At its core, visual rehabilitation is about restoring patients’ quality of vision, with implications for improving their overall quality of life. Gain in VA is not the primary objective; rather, we aim to give back a degree of autonomy through restoration of function.
The MP-3 is a powerful tool for assessing various retinal pathologies and understanding how they are impacting patients from a structural and functional perspective. The ability to perform biofeedback visual rehabilitation with this device adds to and is complementary with other low-vision tools and aids, providing an innovative and important service for these patients.

Director of the National Center of Services for the Prevention of Blindness and Rehabilitation of the Visually Impaired, WHO Collaborating Centre, Rome, Italy
f.amore@iapb.it